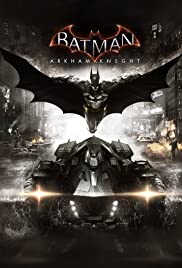 On Halloween, Scarecrow forces the civilian evacuation of Gotham City after threatening to unleash his potent new fear toxin. Batman tracks Scarecrow to a hideout where he rescues the imprisoned Poison Ivy, who had refused to join Batman's other rogues in Scarecrow's plot. Batman meets with Oracle, who identifies Ace Chemicals as the source of Scarecrow's toxin. Batman investigates the facility but encounters the Arkham Knight and his heavily-armed militia. Batman overcomes the forces and locates Scarecrow, who has transformed the entire building into a toxin bomb. Scarecrow reveals that he has kidnapped Oracle, and exposes Batman to the toxin before escaping. Batman inhibits the bomb's blast radius before he is confronted by the Joker.

A flashback reveals that before the Joker died, his infected blood was used in blood transfusions, infecting five people including Batman; Batman, concealing his infection from others, imprisoned the four other recipients who were physically and mentally transforming into the Joker. The Joker, now existing as a mental projection produced by the infected blood and fear toxin, frequently appears to taunt Batman, and manipulate his perception of the world around him. After Batman escapes the exploding Ace Chemicals, he tells Gordon that his daughter has been captured. Gordon angrily leaves to find Scarecrow.

Batman learns that Scarecrow recruited businessman Simon Stagg to build the "Cloudburst": a mass dispersal device for the fear toxin. Batman interrogates Stagg and then confronts Scarecrow aboard Stagg's airship, and a dose of fear toxin allows the Joker to temporarily assume control of Batman's body while the Arkham Knight extracts the Cloudburst. Recovering, Batman locates Oracle in Scarecrow's hideout, but when he arrives she is exposed to the fear toxin, and in terror she commits suicide. Harley Quinn seizes Batman's base in the Panessa movie studio to rescue the Joker-ized patients. Batman and Robin capture Harley and the infected, but one of the patients kills the others, before committing suicide, believing that Batman will become the perfect Joker. Realizing that Batman is infected, Robin attempts to imprison him before the Joker takes control, but Batman traps Robin in a cell, refusing to stop until Scarecrow is caught.

The Arkham Knight activates Cloudburst, flooding the city with fear toxin. Batman destroys the Cloudburst and convinces Ivy to empower an ancient tree that can neutralize the toxin; she succeeds and saves Gotham, but the strain kills her, while Batman's exposure to the toxin strengthens Joker's control. Batman pursues the Arkham Knight to a construction site to rescue Gordon. The Knight reveals himself as Jason Todd, the previous Robin, who was seemingly murdered by the Joker, and has been left traumatized by torture at the Joker's hands. Todd blames Batman for abandoning him, and although Batman offers to help Todd recover, he escapes. Batman and Gordon confront Scarecrow on the building's roof, where Oracle is revealed to be alive, and her suicide the result of a hallucination.Batman rescues Oracle and returns her to the Gotham City Police Department (GCPD), but Scarecrow escapes with Gordon. Using the remaining militia, Scarecrow assaults the GCPD to eliminate Batman's allies. Batman and Oracle neutralize the militia, but Scarecrow uses the distraction to kidnap Robin.

To save Robin and Gordon, Batman surrenders to Scarecrow and is taken to the ruins of Arkham Asylum. Scarecrow reveals Batman's secret identity to the world on television before repeatedly injecting Batman with the fear toxin to break him before the public. Inside his mind, Batman and Joker battle for control; the Joker attempts to weaken Batman by recounting the people who have suffered and died because of Batman's crusade; Batman triumphs and locks the pleading Joker away in his mind forever to be forgotten the Joker's only fear. Todd arrives and frees Batman, who subdues Scarecrow with his own fear toxin.

To ensure that Gotham will be safe for one last day, Batman decided to defeat and lock up the rest of the villains and the Militia (now led by Deathstroke).

The Line of Duty:

Heir to the Cowl:

Lamb to the Slaughter:

A Friend in Need:

Creature of the Night:

While Gordon dispatches the police to reclaim the streets, Batman ensures that Gotham is safe before activating the "Knightfall" protocol to protect his loved ones. Surrounded by reporters, Batman returns home to Wayne Manor where he is greeted by Alfred. As the pair enter the manor, it explodes, seemingly killing them both. Years later, Gordon, now Gotham's mayor, prepares to attend Oracle and Robin's wedding. Elsewhere, two criminals attack a family in an alley but are confronted by a nightmarish silhouette resembling Batman.
本文为作者原创，未经作者许可请勿转载