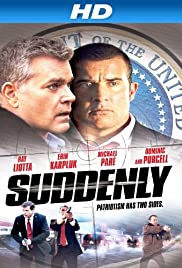 In the small Washington state down of Suddenly, "Deputy" Baron (Dominic Purcell) leads four assassins to impersonate Secret Service agents in order to commandeer the house of Ellen (Erin Karpluk), which they plan to use to assassinate the President by sniper rifle on his visit to the small town. Baron and his men fool the local cops except for Deputy Todd Shaw (Ray Liotta), who is a washed-up former war hero who became the town drunk. Todd served with Ellen's late husband in Iraq, and has developed romantic feelings for Ellen, who rebuffs his advances.

Todd visits Ellen's house and becomes suspicious of Baron, but no one will listen to the ravings of a drunk. The assassins cause Ellen's father to die of a heart attack, but her young teenage son Pidge escapes the house to fetch help. Once Todd discovers Baron's plan, he does not bother calling it in, but does manage to kill one of Baron's crew before he is captured.

Two assassins chat with Todd and Ellen while waiting to execute the plan, leading to a revelation that Todd accidentally killed Ellen's husband when reacting to a grenade attack on a moonless night in Iraq. The third assassin catches Pidge as he flags down local electrician Judd, bringing them both back to the house. Judd electrocutes the third assassin by tricking him into turning on a switch for the lights, and Baron kills his remaining partner for having second thoughts.

Todd jumps Baron, the lone surviving assassin, as he shoots at the President with a sniper rifle, causing him to only graze the President's arm. Pidge shoots Baron as he is about to kill Todd. However, Todd discovers that there was an unknown fifth conspirator communicating via text messages with Baron and his team.

The final scenes feature Todd as a media hero for saving the President's life, but the media also states that the Baron and his men acted alone and there was no "greater conspiracy" by persons unknown to kill the President.
本文为作者原创，未经作者许可请勿转载