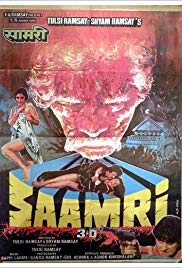 A wealthy Dharmesh Saxena in a small town he worships Kali Maa and black magic so is called Saamri.He known's his death is near and wants to transfer all his wealth to niece Anju living in the city.When Mama Taklifchand finds about this he along with Khanna ,Maria and Professor Chatterjee kill him a