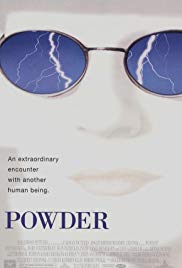 A young boy is discovered living in the basement of a house where an old woman has died. The boy, Jeremy Reed (Sean Patrick Flanery), has the name "Powder" because of his luminous white skin. It turns out that Powder has spent his whole life never leaving the house. The basement is fill wall to wall with books that he has not only read, but memorized every word. This is only the first hint at his incredible powers.

Sheriff Barnum (Lance Henriksen) takes Powder to the local boys home until it can be determined if he might have other kin or what is to become of him. Powder is very unlike the other kids and becomes the object of their ridicule. But soon strange events begin to occur. It turns out that Powder can attract objects and bend them with his thoughts. He is able to conduct electrical energy around him. These actions makes other begin to fear him.

Deputy Harley Duncan (Brandon Smith) is a macho man and expert deer hunter and he takes the boys on a deer hunt. Duncan never misses and sure enough he shoots a deer, but Powder grabs his hand and then touches the dying deer. Duncan can feel "the pain" of the deer dying. He is completely sickened by the event and gives away all his guns and will never hunt again.

The one person who tries to help Powder is Jessie (Mary Steenburgen) and she arranges for him to take some aptitude and intelligence tests. After the tests, Powder comes into the room with the officials and they are all skeptical of him. He simply says to them that he knows they don't believe he could score so well without cheating. As he begins to leave the room, all the lights in the room explode.

Sheriff Barnum's wife, Emma (Danette McMahon) is in a coma and the sheriff doesn't know what to do. Jessie asks Powder to go to her and see if he can help. Powder touches Emma and begins to share her thoughts with the sheriff. He tells the sheriff that she needs to go and he must say it's ok before she can. The sheriff breaks down and nods and his wife dies.

It becomes increasing clear that Powder will never "fit in" and so he runs away and goes back to the house where he was raised. Jessie, Donald Ripley (Jeff Goldblum) and the Sheriff Barnum go after him. There is an approaching thunder storm and as they chase Powder into the field, the lightening strikes get closer and closer. Suddenly, Powder is hit by a strike and is vaporized into thin air. Suddenly the storm stops and all is quiet. Powder is gone.
本文为作者原创，未经作者许可请勿转载